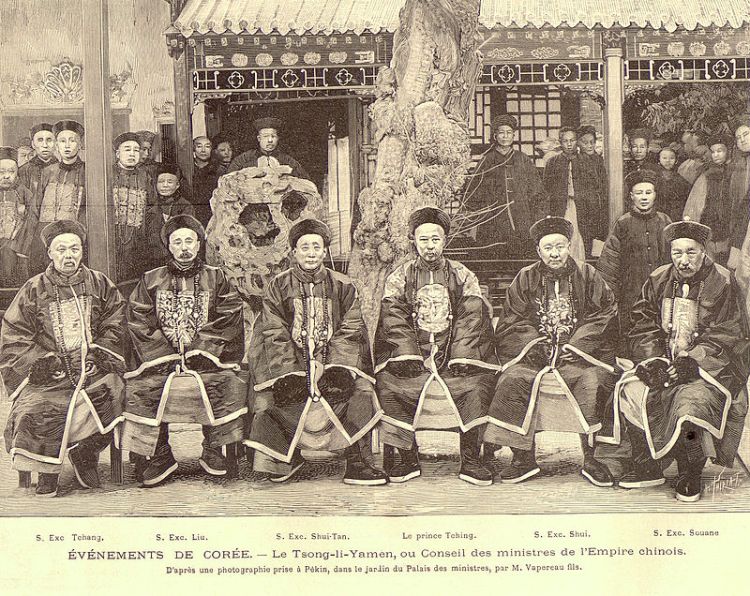 Alert scholar and reader Scott Seligman has  pointed out there appears to be one earlier patentee, Ding Cie Sui (Romanized Chen Tzu-sui in diplomatic correspondence), who had a residence in Fuzhou, China and filed three patents in the United States by assignment to two Americans, the Reverends George S Miner and William N. Brewster, of Hing Hua, China (莆仙儂, in Fujian language, or Putian 莆田 in Mandarin).   Moroever, his story is perhaps even more colorful to those interested in early Chinese IP history.

Mr. Ding seemed to have an active career in the late 1800’s as in inventor.  US Patent Office records show that he filed and obtained three patents US626195, (machine and process for spinning, 1899);  US640716 (spinning machine, 1900) and US733299 (spinning machine 1903).  He was also granted a patent in China by the Zongli Yamen (总理各国事务衙门), on June 17, 1898 for a spinning machine for a patent term of 15 years, which, it appears, had been transferred to the Reverends Miner and Brewster, who licensed the rights to manufacture the machine in 1898. This patent itself had been “examined” by the Zongliyamen which had found it to be a “useful machine, showing that … great skill in inventing.”

At some point, the Americans discovered another Chinese – a wealthy, retired government official named Kung I-tu  also of Fuzhou – was manufacturing something similar.  The licensees lobbied the US mission to ask the Chinese government to stop the infringement.  The local government advised that there was no law permitting the transfer of the patent in China and the right was issued only to Chinese natives.  An additional argument was made that the accused product relied on water power, while the patent invention relied on foot power, and there could be no infringement.  Moreover, the Zongliyamen replied, China had no treaty obligations to protect foreigner’s patent rights at this time.

The U.S. legation noted that a patent treaty was not necessary as the matter involved a Chinese patent, not a foreign patent and questioned why the Zongliyamen issued patents which “it does not intend to protect from infringement.”

Further detail is set forth in the Papers Related to the Foreign Relations of the United States (1899), beginning at about page 178 under the caption “Protection of Purchasers of Chinese Patents.”  These papers include correspondence between Miner and Brewster, the US legation (Mr. Edwin Conger), and none other than John Hay (1838-1905), then serving as Secretary of State under President William McKinley.  Hay had begun his government career decades years earlier as private secretary to Abraham Lincoln.  During 1899 Hay also negotiated  the Open Door Policy (1899), which kept China open to trade with all countries on an equal basis, with international powers.  Conger was a civil war veteran who served as Ambassador to China beginning in 1898, through the Boxer Rebellion, returning to the United States in 1901.

Note: Alert readers may also remember I also described another very early patent litigation in China in the late Qing, which involved two foreign entities in Shanghai pursuant to U.S. law.  This case occured before the Guang Xu patent law was even enacted (the“振兴工艺给奖章程”), which (May 1898).  These various cases suggest that there was more patenting and IP activity in the late Qing than has previously been believed.  Indeed, some suggest that the earliest effort at a patent law may have occurred during the Taiping rebellion (1850-1864).

Here is an article from the The Culver City Herald (Culver City Indiana) (December 10, 1897) about Mr. Ding (Chen)  I repeat it in its entirety, despite its unhappy racial overtones.  This article was brought to my attention by an alert reader: 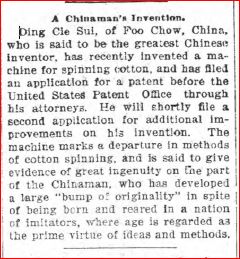