Public Awareness, the Gaokao and Respect for IP 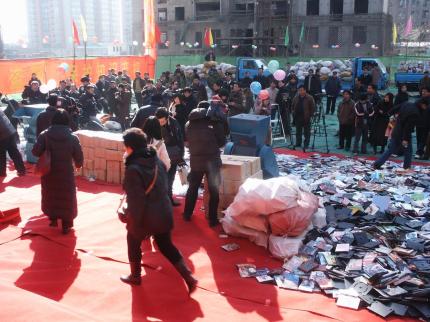 IP Kat’s June 26, 2019 blog  When Gaokao (the toughest exam in China) Meets IP discusses the inclusion for a second straight year of IP-related questions in the Gaokao 高考.  The Gaokao is the Chinese college entrance exam administration administered in the 3rd year of high school.  The inclusion of IP in the Gaokao was also reported in a CNIPR article on June 14, “IP Once Again Appears in the Gaokao” (“高考试卷又见知识产权”).

While the inclusion of IP issues in the Gaokao is one indication of the increased public awareness around IP in China,  a question remains about the effectiveness of many of these efforts.  Arguments about Chinese people needing to increase their educational level to better protect IP have little empirical support.  Chinese survey data in fact has previously shown a negative correlation between the level of education and the willingness to buy pirated goods.  Simply put, poor farmers do not buy pirated goods while educated individuals do.   Government directed public awareness programs may also create biased perspectives. Consider two of the Gaokao questions: “What is the role of IP in promoting open development?” or “Explain why patents should be protected, and why the term of protection should not be indefinite”. These difficult questions may reflect interests in national development and sharing of innovations, rather than creating property rights.  Moreover, increasing public awareness is not without a downside.  If there is a high tolerance for infringement or bad faith activity, one may end up spending money training opportunists on how to abuse the system.

By comparison to China, intellectual property does not loom large in US college entrance exams. The World History Advanced Placement exam covers the technology, but intellectual property is not within its scope. AP Computing Science includes intellectual property in its discussions of Ethical and Social Implications of Computing Systems.  There had also been several efforts to improve education and awareness around IP.  Former USPTO Director Jon Dudas was actively involved in promoting childhood education of IP through PTO-sponsored Camp Invention.  At that time, I remember offers of Director Dudas’ to discuss youth IP education programs with SIPO Commissioner Tian Lipu, including an offer to lecture at a Chinese high school.   As best I recall, China was unwilling to permit USPTO to engage in China on youth IPR education.

Other countries also have instituted IP education programs.  A review of these programs is found in the report of the Center for Intellectual Property Understanding  The State of IP Education Worldwide: Seven Leading Nations (2016).   To its credit, China has not only instituted many notable public awareness programs but has also encouraged other developing countries to do the same.

Unless public awareness programs are subject to rigorous monitoring and evaluation criteria it can be hard to judge the impact of programs beyond showcasing government efforts.  For several years after China joined the WTO, I attended several large-scale counterfeit DVD destruction ceremonies (see picture above).   These programs made good newspaper copy but did little reduce the incidence of piracy.  The failure of these and other efforts led a frustrated United States to bring a WTO case in 2007 to encourage China to increase market access for copyrighted content and to have more robust criminal IP enforcement. The destruction ceremonies did not stop the momentum for that case, nor did they help anticipate the challenges inherent in on-line copyright protection.