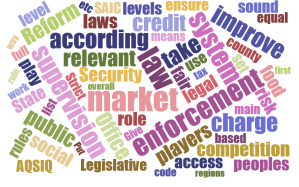 On July 8 the State Council released a new opinion on “market order” which, like many similar rules in China, is suggestive of possible significant policy changes, while being of uncertain legal status, all cloaked with a rather unappealing title.

“Market order” is a term that has significant overlap with IP protection and antitrust matters. It has appeared in the draft patent law revisions of SIPO, and was also the basis for MofCOM’s earlier efforts at coordinating IP protection through the Market Order Rectification Office. Of course, some laws and regulations, such as those involving consumer protection and unfair competition, have a more direct relationship with what many Westerners may conceive as “market order”. These opinions point out some of these, such as by calling for “the strict implementation of the financial, food and drug safety in production.” However, in China the term is arguably broader. For example, this document calls for an expansion of joint liability concepts and of punitive damages when harm is caused to the “market order”, which are usually civil – rather than regulatory – concepts.

The “guiding ideology” of this opinion is positive. It is intended to provide for “equal protection of the legitimate interests of market players, maintain market order of fair competition and promote the sustained and healthy development of economy and society.” The document “insist[s] on the use of the rule of law in …market regulation functions.” Procedures should also involve “government regulatory standards of openness, the process is open, the results made public,” thereby echoing current efforts in IP administrative transparency as well as commitments to make AML procedures more transparent (see: https://chinaipr.com/2013/11/24/through-a-glass-less-darkly-chinas-march-to-administrative-enforcement-transparency/).

The Opinion also calls for “severely punishing monopolistic conduct and unfair competition conduct” in accordance with the relevant provisions of the antitrust law, anti-unfair competition law, and the price law. It also addresses monopolistic agreements that “hamper innovation and technological advancement.”  Other concerns are: false advertising, price fraud, commercial bribery, illegal lottery sales, business defamation, laws to protect all types of intellectual property rights, the fight against manufacturing and selling counterfeit and shoddy goods, etc. The Ministry of Commerce, Development and Reform Commission, State Administration for Industry and Commerce, Intellectual Property Office and other departments were responsible for implementing this provision.

The Opinion also calls for efforts to “to resolve duplicate law enforcement.” Some of this appears directed to efforts to integrate culture and copyright protection through local task forces. However it  does not appear to be specifically directed to antitrust and unfair competition, particularly in its call for “the elimination of duplication multilayered enforcement”, including territorial and subject matter overlaps. The antitrust subject matter overlap appears acute to me at this time between NDRC (pricing law) and SAIC (IP abuse) at least with respect to standards essential patents and licensing.

Considering existing overlaps in copyright (through cultural task forces), trademark (through overlap with AQSIQ, MIIT, and others) and that China has a three-track system for enforcing antitrust matters (MoFCOM, NDRC, and SAIC), efforts to minimize duplication and achieve enforcement by laws that are consistently implemented throughout the country may yet be difficult to achieve absent more extensive reorganization.

Note: The word cloud, above, drawn from a google machine translation of the document suggests a robust role for  “supervision”, “market” and the “law” to promote “competition”, which one hopes is the prerequisite to a more robust role for the market, and not simply by market regulators.

As usual, these are my personal non-official observations.