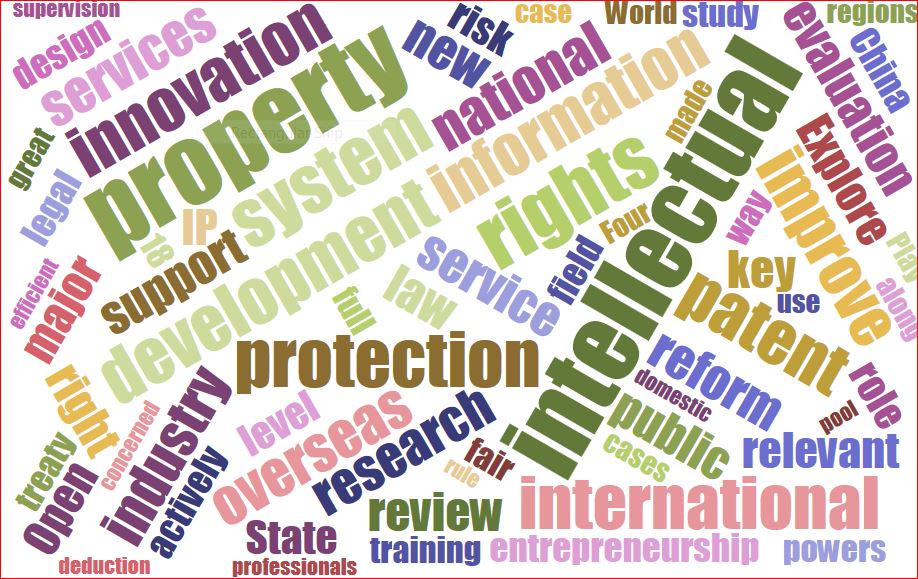 The State Council has been publishing several opinions over the past few years in order to guide China’s efforts to become an innovative economy.  These include an opinion on cloud computing (Feb. 2015),   structural reform to encourage innovation,  innovation and entrepreneurship education (May 2015), on  and on “Internet Plus” (July 2015), amongst other areas.   Now, in 32 articles, the State Council has published its “Opinion of the State Council on Accelerating the Building of a Strong Intellectual Property Nation under New Conditions” (promulgated Dec. 22, 2015) (国务院关于新形势下加快 知识产权强国建设的若干意见, 国发〔2015〕71号) (the “Opinion”).

The wordcloud of the Opinion, posted above gives us some idea its themes.  The Opinion furthers the goals of the National IP Strategy, and promises, by 2020, to achieve “decisive results” in important intellectual property reforms.  Its six broad topics include: reforming the IP management system, implementing strict protection of IP, promoting IP creation and utilization, strengthening planning for key industries in their overseas profile and controlling risks, improving the level of international IP cooperation, and strengthening organizing implementation and policy guarantees. However, this summary does not do justice to some of the interesting policy questions it poses that are suggested by a close reading of the text.

Let me give you a taste:

Is accession to UPOV ’91 Not in the Works? Is new legislation on designs possible?: The Opinion notes that China will “perfect new plant varieties and genetic resources and related traditional knowledge, database protection, and national defense intellectual property related legal systems.  Geographical indications will be legislated in due course.  Research to improve the intellectual property protection system business model and the applied art design patent protection system.”  The lack of reference to accession to UPOV ’91 (for plant variety protection) is concerning, as other parts of the Opinion reference accession to the Hague and Marrakesh treaties (for industrial designs and copyright exceptions, respectively).

Changes in the Tax Law to More Directly Subsidize R&D?: The Opinion notes that China will “implement a research and development expenses tax deduction policy.” Does this suggest that other programs, such as the tax deduction afforded for High and New Technology Enterprises will be phased out?   The Opinion also notes that strategies are also being developed to reduce patent application fees and maintenance costs.

Promoting China’s Technology Exports, but No Focus on Improving the Environment for Technology Imports: The Opinion also separately talks about promoting IP licensing overseas, including supporting model contracts and guidelines, but makes no mention on how to improve the environment for imported technology, which has been the focus of several recent engagements.

Improving Punitive Damages, Judicial Protection, and International Criminal Justice Cooperation: The Opinion underscores a continued commitment to increasing damages, underscoring the “leading role” of the courts in IP protection and calls for increased international criminal justice cooperation.  Could this be read to suggest that the State Council is not in favor of increased administrative enforcement for patents, as is currently being proposed in the patent law reform?

Improving Regulations for IP Abuse, and Addressing the Challenges of F/RAND Licensing – But Also to Include Consideration for Handling Infringement?  The Opinion calls for improving the regulation of IP abuse and the development of enforcement guidelines.  It also calls for improving the licensing policy for Standards Essential Patents, and “practical rules for stopping infringement.” 完善标准必要专利的公平、合理、无歧视许可政策和停止侵权适用规则。 These practical rules will presumably address the controversial issue of the availability of injunctions for patents encumbered by F/RAND licensing obligations.  However, the recognition that the failure of a prospective licensee to take a license could constitute infringement, rather than an abuse of injunctive relief as was suggested by NDRC in its draft IPR abuse guidelines and suggests that a more holistic approach could be in the works.

This is an important policy-oriented document that encompassing a wide range of domestic and global IP issues.  Does the omission or inclusion of individual terms suggest as much as I have inferred in this blog?  Only time will tell.   Until we know more, I welcome readers’ feedback and impressions.