As I have previously blogged here, China’s specialized IP courts are in fact a kind of misnomer: their jurisdictional bases are directed more towards technology-related IP (patents, technical secrets, plant varieties, semiconductor layout designs, software copyright).  “Softer” IP (trademarks, copyright) is not their focus.  In addition, they will provide a more professional appeals court from China’s patent and trademark office.

Surprisingly, one of the most active areas of this court will be trademark administrative appeals, and not in the technology-related matters that is their raison d’etre.

On October 30, 2014, the Beijing Higher People’s Court published a report on patent and trademark administrative appeals for the first nine months of 2014, which underscores the kind of docket that this new court will face.  Trademark administrative cases increased drastically, from 2139 for all of 2013, to 7749 for the first nine months of 2014.  If these 7749 cases were annualized, the total would be 10332 — a five-fold increase for 2014.  Moreover, in 2013, about 50% of this docket involved foreigners.  This court will be of key interest for foreigners.

Patent administrative cases by comparison have been relatively stable and fewer.  The data for 2013 also shows that about 35% of the cases involved foreigners.  Chen Jinchuan (陈锦川) of Beijing Higher People’s Court also noted in a conference, that most foreign patentees are from the United States, Japan, and Germany, and that most of these cases involve invention patents.

The two charts below are drawn from a 2014 article and a 2013 article .  Data in the charts for 2014 is not annualized and may therefore understate the growth in the docket. 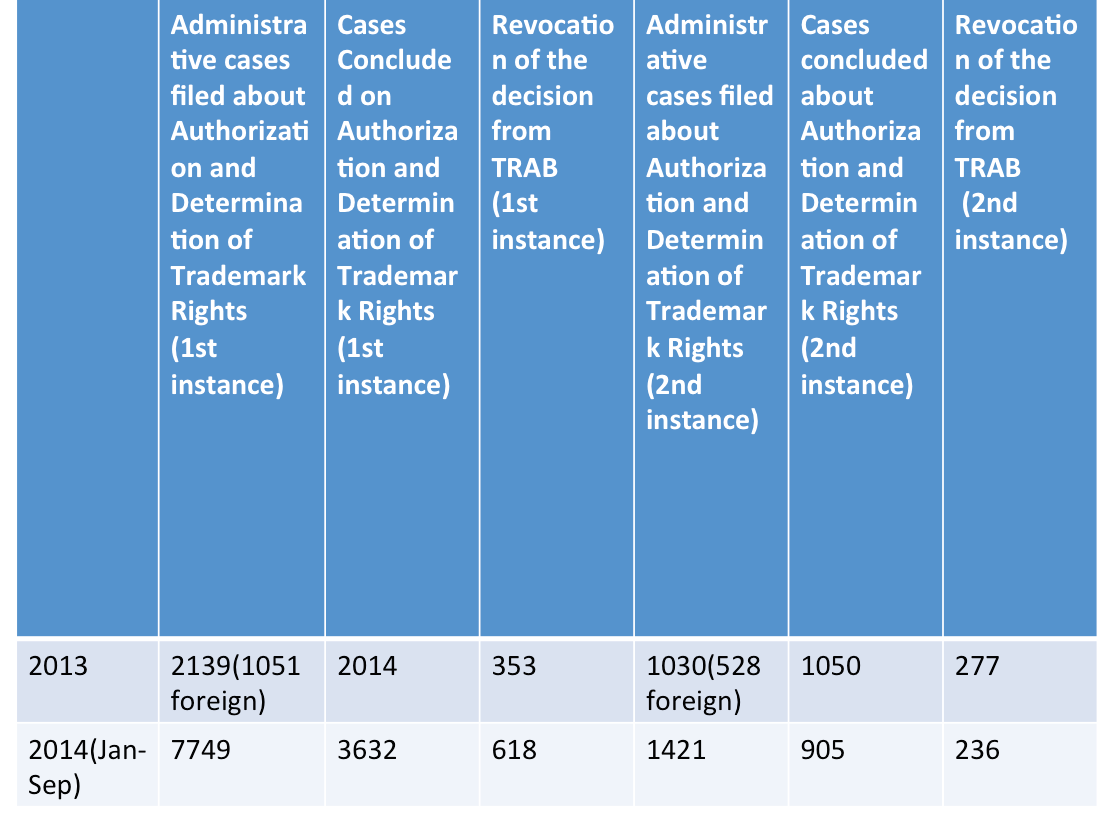 According to the Beijing Intellectual Property Office, cases of review of refused trademark administrative cases, involve two parties (the Trademark Review and Adjudication Board of SAIC and the applicant), are relatively stable and thus easy for the court to handle.  But other administrative cases involve three parties (SAIC, and the two parties contesting the right) and are more difficult for the court to handle.   SAIC also reported that there was a big increase in TRAB activity in early 2014 in anticipation of trademark law reforms that went into effect this year.   In fact, the cases filed in the courts in the first quarter in 2014 (2160) exceeded all cases for 2013.

Is it worth foreigners’ filing cases to challenge the TRAB in the courts?  The TRAB reported that its first instance success rate in the court was 82.8%.  In other words, there is about a one-in-five chance of winning on appeal in the courts.

The initial data shows that this new specialized IP court will continue to be highly important to foreigners.  The court will be quite busy with trademark administrative matters, in addition to the smaller quantity of patent cases.  Both of these cases will be very important to the foreign business community
.