This guest posting from KPMG looks at the evolving Chinese tax environment for multinational enterprise (MNE) management of IP tax issues.   KPMG China has prepared a detailed overview of these issues, alongside setting out how KPMG China tax service lines may assist.  Read more here.  KPMG also actively participated in the recent programs PTO conducted on licensing IP issues in China by providing a background to the changing tax environment.  The first such program is described here.

These trends and developments are having, and will continue to have, an outsized impact on the arrangements under which MNEs manage how their Intellectual Property (IP) is used in relation to their Chinese operations.  IP taxation has long constituted one of the most challenging areas of China tax management and planning, with a plethora of tax issues arising in relation to the conduct of IP development in China, the licensing of technology cross-border into China, and the co-ordination of MNE global IP portfolios through IP management hubs.  The rapid development of the Chinese economy and its relationship to the global economy has, by changing the ways in which MNEs deploy their IP in China, been adding to this tax complexity.

In this regard, the steady increase in the sophistication of China’s economy has been matched by a move away from low cost production in China. There has been a move towards the seizing, by China, of the higher value-added, innovative stages of activity within MNE global value chains for production of high technology products.  In parallel, the rapid expansion of the Chinese market has led to a substantial ramp up, by MNEs, of their marketing and promotion activities in China, alongside the customization of products and brands to meet the needs of the Chinese customer base. These fundamental business conduct changes have led the Chinese tax authorities to take the position that historic approaches to taxing MNE activity in China are now invalidated, and this is compounding the already significant pre-existing challenges of China IP tax management.

Managing the ‘tax friction’ arising from flows of technology into China 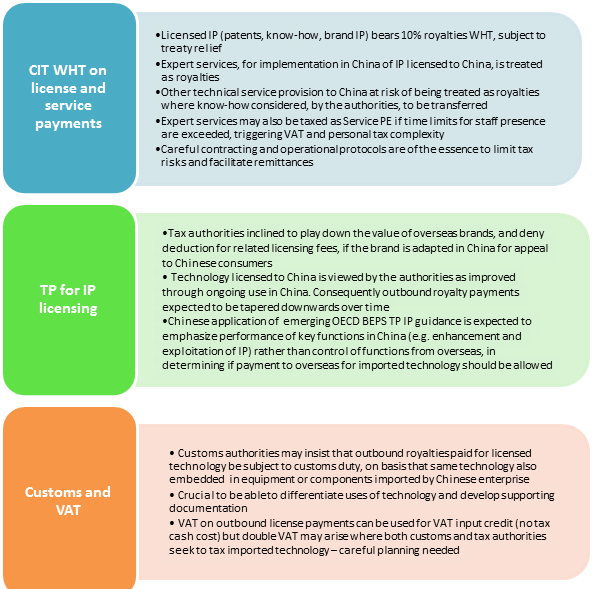 This article prepared by Conrad Turley at KPMG.  Thanks again to KPMG for this guest posting! 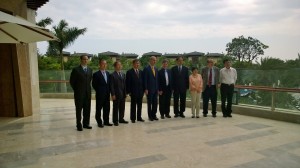 The 2014-15 US – China IP Cooperation Dialogue report has been just released by the US Chamber of Commerce.  The  Chinese title: 中美知识产权学者对话纪要. Here is a link to last year’s report for comparison.

The report was chaired by former PTO Director Dave Kappos on the US side, and Dean Liu Chuntian of Renmin U. on the Chinese side.  Former judges Rader and Cheng Yongshun were also were part of the team.  At our various meetings we hosted former SIPO Commissioner Tian Lipu, NCA Vice Commissioner Yan Xiaohong, senior judges from the IP courts and Supreme People’s Courts, trademark officials, academics and others.  I was part of the U.S. side for a second year, and was joined by Tony Chen of Jones Day and Eric Priest of the University of Oregon.

I have strongly supported the Dialogue since its inception, when I was at Fordham Law School, in order to provide a de-politicized, expert and wide ranging engagement on Chinese IP issues.  If last year’s report is an indication of how this year’s report will be received, it will likely be widely circulated inside and outside the Chinese government.

Photos above by Mark Cohen.  Top photo at Hainan Island meeting, bottom photo in Beijing at public meeting with U.S. Amb. Max Baucus, US and Chinese guests and dialogue experts (both photos early 2015).

Two of my favorite China IP programs will be taking place this October.

From October 8-9, UC Berkeley will be hosting the 4th Annual US-China IP Conference: Best Practices for Innovation and Creativity（“创新驱动发展的最佳实践”）with Renmin University and Loyola University (Los Angeles) in Berkeley, California. Here’s the link for further information.  Here’s my blog on the program last year.

Registration is also now open for the Federal Circuit Bar Association’s program in Shanghai October 18-19.  Here’s the link to the program site.  The program is co-sponsored by the FCBA, East China University of Political  Science  and Law and the Intellectual Property Law Association of China.   The title for this year’s event is “ International Forum on Intellectual Property and Trade 2015 Adjudication, Administration, and Innovation.”  Here’s a link that describes, in part, the last major FCBA program in China and another link to an official USPTO blog about the significant of that event.

I hope to be speaking at both events.