The 2014-15 US – China IP Cooperation Dialogue report has been just released by the US Chamber of Commerce.  The  Chinese title: 中美知识产权学者对话纪要. Here is a link to last year’s report for comparison.

The report was chaired by former PTO Director Dave Kappos on the US side, and Dean Liu Chuntian of Renmin U. on the Chinese side.  Former judges Rader and Cheng Yongshun were also were part of the team.  At our various meetings we hosted former SIPO Commissioner Tian Lipu, NCA Vice Commissioner Yan Xiaohong, senior judges from the IP courts and Supreme People’s Courts, trademark officials, academics and others.  I was part of the U.S. side for a second year, and was joined by Tony Chen of Jones Day and Eric Priest of the University of Oregon.

I have strongly supported the Dialogue since its inception, when I was at Fordham Law School, in order to provide a de-politicized, expert and wide ranging engagement on Chinese IP issues.  If last year’s report is an indication of how this year’s report will be received, it will likely be widely circulated inside and outside the Chinese government. 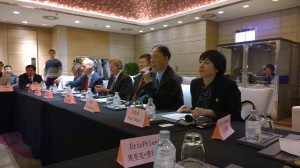 Photos above by Mark Cohen.  Top photo at Hainan Island meeting, bottom photo in Beijing at public meeting with U.S. Amb. Max Baucus, US and Chinese guests and dialogue experts (both photos early 2015).