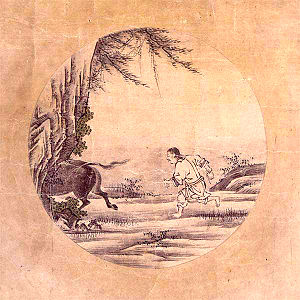 Many Westerners have little sense of how deeply industrial policy is built into the China’s intellectual property system.   In the past, this blog has reported on some of the industry focused plans, such as the biotechnology plan and the development and execution of the National IP Strategy. China has also woken up to the problem of its plans being misunderstood.  It recently released an animated film  encouraging foreigners to study the new 13th national Five Fear Plan (十三五), presumably to increase understanding of this newly released plan.

I recently participated in a panel on industrial policy and intellectual property at the 2016 Fordham IP Conference, where we discussed the role of industrial policy in antitrust, copyright and patent policy in China.   In my search for a new way of approaching this issue, I turned to another Chinese tradition regarding dispelling illusion to present to the audience how foreigners approach this issue.

The 10 Zen Ox Herding Pictures are useful metaphors for stages of awareness of industrial policy in IP, much as they are for Buddhist enlightenment, from finding the ox to enlightenment where the ox and self disappear.  In the West, the ox herding pictures were popularized through Cat Stevens’ album “Catch Bull at Four, ”  which had several songs related to Buddhist meditation and practice.  I think the analogy to dispelling illusion holds.

Here are my four stages of riding the “ox” of industrial policy in IP in China: unawareness of the ox; seeing the tail; understanding the ox; and riding the ox.

The first stage in understanding IP and industrial policy is unawareness.

Some individuals after a few visits to China and seeing the incredible growth and dynamism of the economy, believe that China is a fully market-oriented economy and may remain ignorant of how much China’s economy continues to be planned.   Denial is not unawareness, for an individual in denial is unlikely to notice the presence of industrial policy.

In fact, foreigners that are first introduced to industrial planning in China because of the incredible growth in China, much of it due to market mechanisms.  Notwithstanding this growth, the United States doesn’t have patent quotas, subsidies, early warning systems, administrative enforcement operating on annual campaigns, with an extensive administrative IP enforcement system – to name but a few “distortions” from letting markets govern the protection of intellectual property rights.  Moreover, as my colleague Eric Priest pointed out at the Fordham Conference with respect to copyright licensing, and as Prof. Breznitz has reported with respect to innovation, much of the dynamism in China’s economy has stemmed from places where the market, and not the state has governed the choices that enterprises make.

What, I believe, distinguishes Chinese industrial policy is its pervasiveness.   As an experiment in private practice a few years ago, I once copied and summarized several articles in a Chinese government affiliated publication about China’s patent holdings in a highly competitive ICT field.  The articles described several US companies as having a “monopolistic” control of the technology through their patents and described how China would develop competing technologies.  I send the articles to one of the fortune 100 US companies mentioned in the article.  One of their senior lawyers called me up suggesting that I must have infiltrated a Chinese competitors’ computer network.  “No”, I advised “in fact you too can subscribe to this government publication for about 10 USD per year.”

The next stage is seeing the tail.

Often the tail of the ox, but not its full body, is perceived first.  The tail may be manifested by actions of a Chinese partner or the Chinese government that seem contrary to market policies, but are probably mandated by government directives.   An example might include China’s failed launch of a home-grown 3G standard.  The tail gives us a glimpse of what is likely to be a much larger body.

Many companies at this stage may view industrial policy issues solely as government relations issues, and they may handle many IP issues as non-legal matters.   A foreign company might link up with large, well-connected companies thinking that a major Chinese company will offer some measure of protection or good “relations” (关系) for their business.   They may also have a large government relations or media relations team.   The company recognizes that the government plays an outsized role in China’s IP environment, but they have not yet judged how much that role might affect their plans.  Because of this focus on government relations, companies may also face risks involving compliance and/or legal ethical standards as they try to navigate their understanding that the Chinese government accomplishes its goals via ‘relations.’

A few years ago, I met with a company that was concerned about rampant patent infringement of its high tech steel alloy product.  They had partnered with a major SOE in a JV to manufacture market this product in China, and were surprised that the SOE seemed unable to stop the infringing activity.  I asked them if they had looked up any of the industrial policies surrounding this product, national or local.  They said they were unaware of any such policies, but instead relied on their SOE partner.  In a matter of minutes, we discovered several national and local policies Chinese plans to develop technologies and products in their field market.  I told them that it was my impression that they, in a sense, were targeted, before they ever entered into a venture in China.  The company had now seen the tail of the ox —  it was up to them now to decide how to best steer their activities in light of the national focus on their technologies.

The chief IP counsel of a European company recently told me of her client’s legal problems: “I feel like we are just seeing an iceberg.  What we are seeing with the courts and regulatory agencies is only a small part of the story.”  This lawyer was concerned about handling of patent validity determinations and regulations for her company’s products.  The tip of the iceberg that this lawyer in the form of interference with its actions, was in fact the tail of the ox, where industrial policy concerns may be affecting legal and policy decisions.

The third stage is understanding the ox.   Jeff Immelt of General Electric was one of the few CEO’s to recognize the importance of studying China’s five year plans.   Understanding the ox is not a simple task.  The plans are wide and far reaching, and extend deeply in the Chinese political system.   IP and innovation related plans, for example, also encompass areas such as talent development, subsidies for IP filings, government training, foreign cooperation and collaboration, public awareness, standards for civil service promotion, amongst other areas.    Properly understanding the ox means one needs to develop appropriate IP, government relations, media relations and related strategies based on how China plans and allocates resources.

Sometimes understanding the ox may mean abandoning certain pre-conceived legal ideas.  Generally, most western lawyers look to the law as written as their principle guide for planning a company’s behavior.  All lawyers should also look at the law as applied – recognizing that certain laws or provisions are likely to be actively enforced and have a more dramatic impact that statutory drafting may suggest, as they are incorporated into state or agency planning.  The numbers China  collects for planning and evaluation may tell a different tale from foreign perceptions of China’s IP system.  Whether or not they are fully accurate, they are often helpful to foreign positions, and they are the numbers that determine Chinese policy.

Being able to engage Chinese counterparts in the terms by which they could be useful to you or officials themselves are being evaluated is also helpful in advancing a company’s goals.   Some of the most remarkable discussions I have had with Chinese IP agencies have involved their plans; in most cases officials were quite familiar with their IP plans and were able to tell me their goals for patents per capita, PCT filings, copyright registrations, trademark filings, etc.  Increasingly those IP plans have also included specific goals for IP commercialization.   Interestingly, most plans have not adequately considered how to calculate trade secret protection in their planning matrices.

The last stage is riding the ox.  Once the ox is perceived and accepted as part of one’s business activity in China, it is a presence that can no longer be ignored.  Successful companies recognize that they will never tame the ox.  Instead they must learn to incorporate the ox into their IP strategies, so that they maximize their advocacy and effectiveness in the Chinese market.  Examples of this strategy may be Qualcomm’s recent efforts to invest in China and leverage its settlement with NDRC to obtain additional licensing income.  Other companies have also found that by teaming up with Chinese regulatory authorities, their perceived adversary of the regulatory state can often be an important ally.