Although many of the proposed changes in China’s patent law amendments are welcome, the draft amendments also present a difficult  choice in two key areas: (a) patent administrative enforcement and (b) punitive civil damages.

(B)  The proposed draft would also provide for punitive damages upon a judicial finding of  willful patent infringement (Art. 72), with a maximum of 5x damages.  To many this may appear to be a welcome improvement. Punishing willful IP infringement is currently a policy that both the US and Chinese leaders share.  On the US side, the term IP “theft” appears 119 times in the Section 301 Report, while civil damages and compensation appear hardly at all.  On April 9, 2018, President Trump tweeted that he is “Defiant” and that he “Will End …Massive I.P. Theft” by China. Premier Li Keqiang apparently shares some of this enthusiasm.  He had noted in his annual report on the work of the government, that China needs to “improve IP protection, and implement a system for punitive damages against infringement “加强知识产权保护，实行侵权惩罚性赔偿制度” .

While punishment is an important tool, the more pervasive problem is that basic civil remedies are too weak.  Actual damages are in fact rarely imposed by Chinese courts and, have been the outlier.  Courts impose statutory damages in over 90% of all patent cases as well as in other IP areas.  In the Beijing IP Court median damages awarded for patent infringement in 2016 were only 112,500 RMB, or less than 20,000 USD. Rather than unduly emphasizing punishment, a better structural place to start is in improving the civil system to achieve maximum compensatory deterrence.

Intellectual property is fundamentally a private right (TRIPS Agreement, preface), and adequate civil remedies should therefore be the priority.  Using remedies that are not at the core of a healthy IP system based on private rights (administrative remedies/punitive damages)  are not a substitute for predictable, compensatory private remedies. In fact, the administrative system affords no private compensation to victims.  Punitive and administrative remedies are also often left to the discretion of the enforcement agencies, which can result in unpredictable enforcement.  In 2017 for example, despite the pressure on China to address trade secret theft, criminal cases declined by 35%.

By focusing on deterrent civil remedies that are fairly administered, the US will find common cause with many Chinese officials.  The issue was addressed  by Justice Tao Kaiyuan of the Supreme People’s Court  who similarly believes that the civil patent system is the primary enforcement mechanism for private patent rights.  Justice Luo Dongchuan, who is now in charge of China’s new appellate IP circuit court, also underscored the importance of the IP courts in advancing rule of law in a visit to the US.  In an article I wrote,  with former PTO Director David Kappos and Chief Judge  Rader (ret), we also underscored that China’s administrative system is fundamentally unlike the judicial mechanisms of the USITC, and that better recourse to improved patent enforcement can be had with the courts.

Moreover, these punitive and quasi-legal remedies could easily be turned against the foreign community.  Consider, for example, that due process for foreigners has been a long-standing concern  in Chinese IP matters, well before the current concerns over retaliation over the proposed extradition of Huawei’s CFO.  Moreover, several cases have demonstrated that   foreigners are often the test cases for “improved” enforcement mechanisms in IP, such as in Chint v. Schneider (high patent damages), Iwncomm v Sony (injunctive relief in a SEP case), AMEC v Veeco (preliminary injunctions in patent infringement matters), antitrust cases involving licensing  and even the first publicized criminal copyright case, in which the principal defendants were two Americans (Guthrie and Cody).

I believe that China needs to focus its patent enforcement resources on the courts, and especially to give the new national appellate IP court a try in providing balanced and fair enforcement of IP rights, both foreign and domestic.  Both the US and China might try to focus more on much delayed and long overdue improvements in the civil system, some of whic are contemplated by the patent law amendments.  A rhetoric based too much around punishment may in the end prove to be self-defeating in the absence of necessary legal guarantees such as improvements in awarding compensatory damages, greater procedural due process, and improved transparency in the courts and administrative agencies. 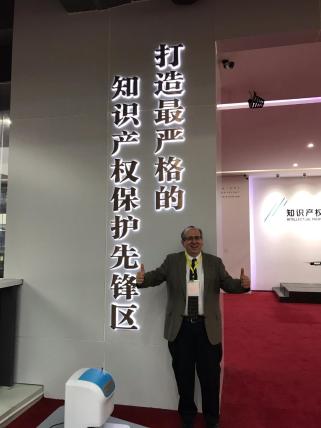 Bottom photo of the author in front of a Nanshan District Shenzhen IP Office sign “Create the Most Strict IP Protection Pioneering District” (Jan. 2019).  The opinions expressed in this blog are the author’s own.  Please address any corrections or improvements to: chinaipr@yahoo.com