Forecasting the Impact of the Third Plenum on IP Adjudication

What are the impacts of the resolution and spirits of the recent Third Plenum of the 18th Communist Party on rule of law in China, particularly commercial rule of law and IP?

The morning of December 11, from 10:00 to 11:30, George Washington University Law School will be hosting its third annual China IP Program to discuss what China’s recent rule of law developments mean.    I will attend this program along with Don Clarke  of GWU, Xuan-Thao Nguyen (Southern Methodist University), Chief Judge Rader of the CAFC and others.   By my reckoning there have been three important streams of change affecting IP and rule of law in the past few months.

One of the important developments is administrative transparency and accountability.  As previously reported,  Premier Li Keqiang is seeking to establish greater transparency in administrative enforcement decisions, through the State Council’s enactment of an “Opinion on Making Publicly Available According to Law Information on Administrative Penalties Concerning the Production and Sale of Fake, Counterfeit and Sub-standard Goods and Intellectual Property Rights Infringement” (关于依法公开制售假冒伪劣商品和侵犯知识产权行政处罚案件信息的意见).  At a conference this past December 5 sponsored by MofCOM, we were told that this regulation is likely to be made public available in the near future.  Moreover, as many as 300,000 cases each year involving IP infringements and fake and shoddy goods are likely to be affected.

At the same time, an equally important September 2012 decision that I previously reported on: the “Opinion Concerning How to Improve The Work of Coordinating Administrative and Criminal Enforcement in Striking at IP Infringements and the Manufacture and Sale of Fake and Shoddy Goods”  (关于做好打击侵犯知识产权和制售假冒伪劣商品工作中行政执法与刑事司法衔接的意见), remains non-public.  However, it appears that this effort at administrative coordination in criminal IP from September 2012 has now “migrated” to a higher level.  Improvements in administrative/criminal coordination were also discussed in the November 12, 2013 Resolution Concerning Some Major Issues in Comprehensively Deepening Reform, passed at the  Third Plenum (“CCP Resolution”) (Chinese language version is found here.  That Resolution called for China to “resolve issues of overlapping responsibilities and many-headed law enforcement, and establish administrative law enforcement systems with unified powers and high-efficiency authority” and to “perfect mechanisms to link administrative law enforcement with the criminal judiciary”.  China is once again “crossing the legal reform river by feeling the IP stones.”

Another important area is in general judicial transparency and reform.  SPC President Zhou Qiang discussed the importance of publishing court decisions involving intellectual property in an important exchange he had with Chief Judge Rader on October 16 of this year.  Since that time, according to press reports, the newly appointed SPC President has vowed to increase transparency in the judicial process in light of the spirit of the recently concluded Third Plenum.

But transparency includes more than publications of decisions.  Chief Judge Rader has informed me that at the meeting between SPC President Zhou and Chief Judge Rader, Zhou inquired at length about the CAFC practice of publishing the verbatim version of arguments within minutes on the internet, a practice that Zhou might have compared with broadcasts made during the Bo Xilai trial.  In addition, Chief Judge Rader expressed praise for the civil procedure and trademark reforms, which have introduced greater transparency and accountability, including permitting a measure of compulsory discovery of adverse evidence held by an opposing party.  The transparency of judicial decisions generally was also raised in the CCP Resolution, which provided that China should:  “Move towards open trials and open prosecutions, record and maintain materials from the entire court process, strengthen the rationality of legal documents, and promote openness of valid court judgment documents.”

Another important judicial reform that could be significant for IP in the CCP Resolution involves “explor[ing] the establishment of judicial jurisdiction systems that are suitably separated from administrative areas, guarantee the uniform and correct implementation of State laws” and to “reform the trial committee system, perfect case handling responsibility systems for presiding judges and collegiate benches, let those hearing the case judge, and those judging the case be responsible.” The former, if fully implemented, would support greater independence of the courts from the local governments that fund them, and the latter would dilute influence from adjudication committees and return decision-making power to judges who hear cases.  As it is possible that a disproportionate number of foreign-related cases are decided by adjudication committees, this could be a significant development.

A third area of reform is in specialized IP courts.  The 2008 National IP Strategy stated that China would “study the jurisdictional issues for the appropriate concentration for adjudication of patent and other technologically complex cases, and will investigate establishing an appellate IP court.”  The CCP Resolution states that China would “explore the establishment of intellectual property rights courts.”

Compared to the National IP Strategy, the CCP Resolution is a higher political statement.  Moreover, its substance is not limited to appellate courts, nor constrained to “technologically complex cases”.  While in 2008 an appellate IP court had been considered necessary to provide protection from local influence, the CCP Resolution notes elsewhere and more generally that China should establish “judicial jurisdiction systems that are suitably separated from administrative areas”.   One conclusion: the necessity of having courts that are less tied to local influence has migrated from an IP-related topic in the 2008 National IP Strategy, to one involving general legal reform.

Several courts are already moving to establish specialized IP courts.  At a recent program I attended in Suzhou sponsored by Renmin University, the President of Jiangsu’s High Court noted that Jiangsu is actively preparing for establishing such a court.  Moreover, the media has noted that Guangdong is also conducting research efforts for its establishment. Both jurisdictions are pioneers in combining civil/criminal and administrative IP jurisdiction in one tribunal.  Beijing was the first jurisdiction to establish IP tribunals in its intermediate courts (1993), and is probably the most important place where greater improvements could assist both foreign and domestic rights holders, as it is the jurisdiction where appeals from the patent and trademark offices are held.  As I have noted in a prior blog,  foreign parties are involved in approximately 47% of that IP administrative appeal docket.

Former Supreme People’s Court IPR Tribunal Chief Judge Jiang Zhipei has also been a strong advocate for specialized IP courts in Beijing because of its national and international influence.   I share the hope of my friend Chief Judge Jiang that the CCP Resolution will help accelerate the establishment of these specialized IP courts and even more importantly, improve the adjudication of all legal issues matters for Chinese and foreigners alike.

Here’s the flyer for the GW Program: 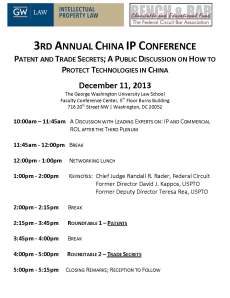