The 27th Joint Commission on Commerce and Trade concluded in Washington, DC on Wednesday, November 23, 2016, in time for the Thanksgiving holidays in the United States.  Here is a link to the U.S. government fact sheet.  The following is my summery of IP-related issues –

Amongst the “core” IP issues the fact sheet notes that China agreed to “take further efforts to combat bad faith trademark filings.”  Regarding technology transfer, China advised that it is “actively conducting research on the Technology Import and Export Administration Regulations (2002) (TIER) to address U.S. concerns.”  Both of these statements are forward leaning although they admittedly lack specificity.  Regarding trade secrets protection, China agreed that “ in practice, trade secrets misappropriation may be committed by individuals, including employees, who may not be directly involved in the manufacture or sale of goods and services” , thus addressing the concern that the trade secret provisions of the anti-unfair competition law only address commercial undertakings (this issue was also addressed in the draft revisions of the AUCL that was released earlier this year).  China also announced that it plans to bolster other elements of its trade secrets regime, including with respect to  evidence preservation orders  and damage calculations.  Also on the technology side, China also confirmed that “the government has never asked the fund to require compulsory technology or IPR transfer as a condition for participation in [state semiconductor] Funds’ investment projects.”

Issues involving entertainment market access in China also got some attention.  Regarding music licensing, China committed to “issue a measure allowing foreign-invested enterprises to engage in online music distribution and revoking the requirement established by the Ministry of Culture’s 2009 Circular on Strengthening and Improving Online Music Content Examination.”  Regarding theatrical film distribution, which had been the subject of a settlement of a WTO case between the United States and China, China affirmed that it will “enter into consultations with the United States in calendar year 2017 in order to provide further meaningful compensation to the United States.”  Furthermore, the United States and China agreed that, as part of the calendar year 2017 consultations, they will seek to increase the number of revenue-sharing films to be imported each year and the share of gross box office receipts received by U.S. enterprises.

There are several outcomes which are cooperative in nature.  Regarding on-line IP issues, both sides committed to training of small and medium-sized enterprises as well as exploring the use of big data and other new information technologies to enhance the capability for combating infringement and counterfeiting online.  A program on copyright protection for live sports broadcasts is planned for 2017.  In addition, China committed to further study the feasibility of protecting the broadcasts of sporting events under its Copyright Law and the United States “welcomes further clarification” on this issue from the Chinese judiciary “at the earliest possible time.”    Other cooperative programs include ones on: “legal protections for product and service designs, and U.S. trade dress protections “; “criminal enforcement of trade secrets and counterfeit pharmaceuticals”; a joint conference in 2017 on criminal law, legislation and enforcement “to share experiences on recent trends in technologies, business models, and legal developments”; and a workshop on Judicial IPR Protection in China in 2017.

Often events happen on the margins on the JCCT which may not be fully reflected in JCCT outcomes.  There were two notable developments around the time of the JCCT affecting intellectual property rights.  One was the publication of the draft revisions of China’s patent examination guidelines, which address post filing data supplementation, software and business method patents.   Post-filing supplementation of data has been the subject of prior JCCT and bilateral commitments.  Another development involved de-linking of government procurement policies with indigenous innovation, which has been the subject of a recent State Council document that, according to the fact sheet, “requir[es] all local regions and all agencies to further clean up related measures involving linking the indigenous innovation policy to the provision of government procurement preferences….”

The JCCT has a long history, but has typically grown in scope and significance over the years as the US and Chinese economies have increasingly become interdependent.  This was the last JCCT of the Obama administration.  It will next be up to the Trump Administration to decide how to guide the JCCT to continue to play a useful role in bilateral trade relations.

The above are my personal, non-official observations.  All photos are by Mark A. Cohen. 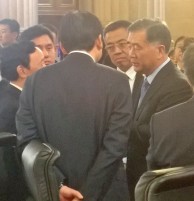 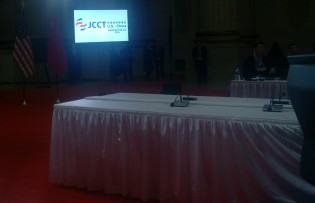